Anyone who's ever had to buy resistors from sites like RS, Farnell or DigiKey will know that there are myriad types to choose from: "carbon composite", "wire-wound", "carbon film", "metal film"... what do these mean, and in which applications are they useful and harmful? 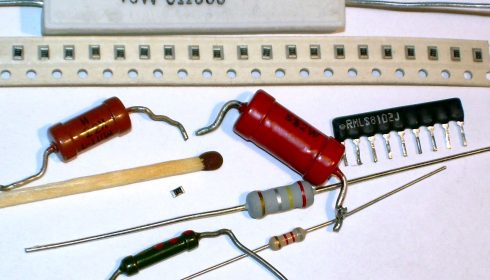 Assorted resistors. Which type is useful when? (Source: Wikimedia Commons) 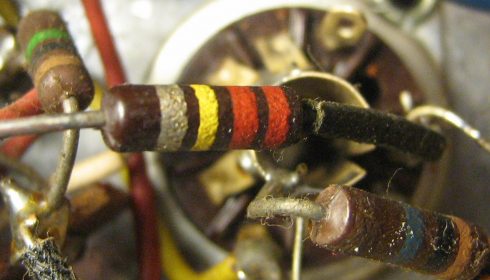 Carbon composite resistor. These have mostly been superseded by film resistors. (Source: Wikimedia)

These are made from conductive carbon dust packed together with clay, with the ratio determining the resistance. They are generally available only for low power applications, but can withstand short high current bursts. The material properties are such that it is difficult for manufacturers to precisely define the resistance, so tolerances are generally poor. The temperature coefficients of carbon composite resistors are also generally poor (typically 1000 ppm/°C or greater), meaning that these resistors are useful mainly for hobby and general purpose circuits.

To add insult to injury, apart from unavoidable Johnson noise, these resistors also typically suffer from excess low frequency noise. The cause of this noise is not well understood, but carbon composite resistors show high levels of noise at low frequencies with an inverse frequency dependence (1/f noise power). This document contains careful measurements of different types of resistor, so if low frequency noise is important in your application, take a look.

Carbon composite resistors have been largely superseded by film resistors, of which there are two main types: carbon film and metal film. 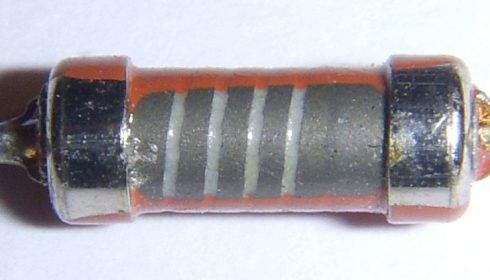 Carbon film resistor with exposed film. Note the spiral etched into the film at the factory to trim to a precise resistance. (Source: Shaddack, via Wikimedia Commons)

Film resistors are the bread-and-butter of most designs. They are made with a mix of ceramic and metal ("cermet") or metal oxide deposited in a film over an insulating substrate. The resistance is determined by the deposited thickness of the film, and very high resistances can be achieved in small packages with this technique. Precise tolerances are reached during manufacturing by using a laser to etch a spiral around the film to create a longer effective path around the outside of the substrate.

Film resistors have very good temperature coefficients (typically 50-1000 ppm/°C, with carbon and metal types tending to have opposite signs), providing stability for precision circuit applications. Due to the deposition of layers of metal without a clay matrix, these resistors are susceptible to damage from high currents and therefore are not generally available in high power packages.

Wire-wound resistors are, as the name suggests, made by tightly winding conductive wire around an insulating substrate. The thickness ("gauge") of the wire and the number of turns made determine the resistance, but this creates a volume constraint and so these resistors are typically only available with small (less than 100 kΩ) resistances.

Available tolerances are typically fine for most applications, but precision laser trimming is not an option unlike with film resistors and so tolerances are generally not lower than 1%. 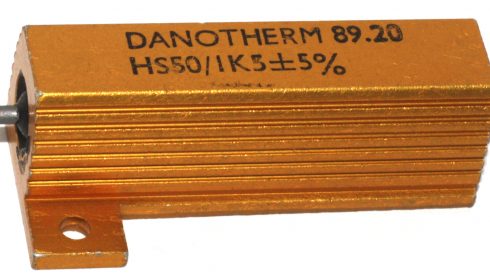 Wire-wound resistor. Note the metal packaging and ability to mount the resistor to a panel for good heat sinking. (Source: Olli Niemitalo via Wikimedia Commons)

Given the relatively thick (thin wire is still much thicker than film) conductors used in the construction, these resistors are able to carry large currents and are available in very high power packages - 50 W or more - making them ideal as heating elements (intentional or otherwise). They also exhibit low excess noise, but the downside, however, is that the wound wire creates a coil which induces an electric field, creating a phase shift in signals particularly at high frequencies. Some wire-wound resistors combat this effect by counter-winding the wire to cancel the inductance, but it is difficult to remove the inductance entirely. Use of wire-wound resistors in precision circuits - which typically don't require high power anyway - is discouraged in favour of film resistors in most applications.