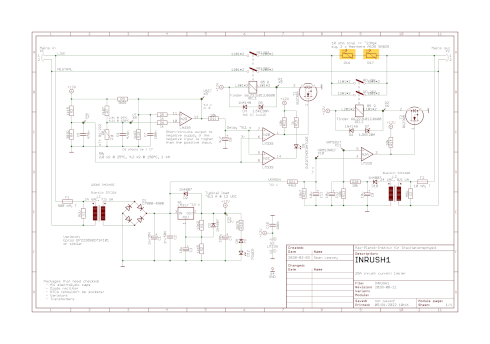 Our DC supply racks in the lab at the AEI 10 m prototype need inrush current limiting so that the 35 A fuses in the nearby mains distribution cabinet don't trip when we turn on the approximately 20 parallel linear power supplies per rack. We bought limiters purporting to be suitable for our roughly 20 A steady state load a long time ago that claimed to limit peak current draw to 25 A, but these did not actually work, instead tripping the supply cabinet's 35 A fuses. We first tried to modify the negative temperature coefficient resistor (NTC) in these limiters to parts with higher initial resistance, which would in theory reduce the peak current draw, but the limiters' timing circuits (whose job it is to short the NTC resistor after a short delay to save power dissipation during steady state operation - which is considerable at 20 A steady state) was still too quick for the linear supply capacitors to charge and so still tripped the cabinet fuse. Given the lack of suitable alternatives to this commercial device we had to design our own.

In principle an inrush limiter can be as simple as an NTC resistor. However, these still have some resistance in steady state, and if we draw 20 A even a fraction of an ohm will cause significant heating (40 W @ 0.1 Ω). That's why most high current designs - and also the design here - have a delay circuit that triggers a relay to short the NTC shortly after switch-on to avoid its heating loss. The delay needs to be long enough for the inrush current to stop (in our case, for the linear power supplys' capacitors to become charged, transformers to be in steady state, etc.) but short enough to avoid significant heating in the NTCs. 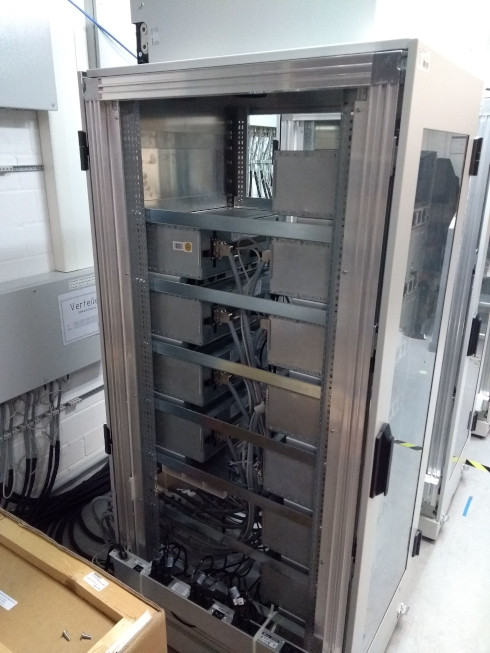 One of the three DC supply racks with ~20 linear power supplies each.

In discussion with colleagues I decided to use a linear regulator to produce the voltage required to actuate the relay. While the smaller form factor provided by a switch mode power supply could have helped, we didn't trust their long term reliability. We also decided to have an overtemperature detector which will trip the output if the temperature on the NTCs gets too high. This requires careful tuning because part of the normal operation of the NTCs is for them to get hot and drop their resistance. The overtemperature cut-out is a fail-safe in case they get too hot (e.g. due to degradation, a short, or too much load), so we don't potentially start a fire inside the racks (at least from this mechanism!).

The operation of my design is roughly as follows. Most of the resistor values etc. are not yet defined as they rely on the relays we choose, which in turn depends on the mechanics, limited by available space. Since I haven't yet built this, these values aren't final. The delay circuit capacitor value also needs tuned during commissioning due to the real NTC tolerance.

There is a new trick I used in this circuit alluded to above that will need tested in reality: the LM311 comparator N2D uses unstable negative feedback; once it trips due to overtemperature, the feedback switches to positive such that the comparator will stay tripped until its power is cycled. This is intentional so that the supplies don't yo-yo between on and off as the NTCs get hot and cold if the NTCs get too hot too quickly. This trigger relies on the behaviour of this particular comparator (it's an open-collector output type, and apparently doesn't have diodes at its input, which is a must for this trip system to work properly). I've simulated it and it seems to work, yet I've never tested it in practice - it's a new invention.

So far I've not been able to try this circuit because a bespoke mechanical enclosure must also be designed to fit into the one place they can fit in our DC supply racks, and the board will likely have to have use all available space in the enclosure, so has to wait.