At my work, we have a lot of Stanford Research SR785 network analysers for measuring signals in the audio band and up to around 100 kHz. They're an old design - made in the early 90s - but have legendary reliability and still match the performance of the best current designs. They're so popular, in fact, that Stanford Research still sell them, complete with retro beige cases, green-on-black screens (though I hear they now come with TFT instead of CRT) and a multitude of hard and soft keys; not a smudgy touch screen in sight. Ours even has a floppy drive for saving data, and we still use it. Newer models have a USB floppy drive emulator instead.

In the past few years a screen on a unit in one of our labs has gradually faded to the point of near-illegibility. There are two buttons to adjust the brightness on the outside, but had way too little range to the range required to fix the brightness. 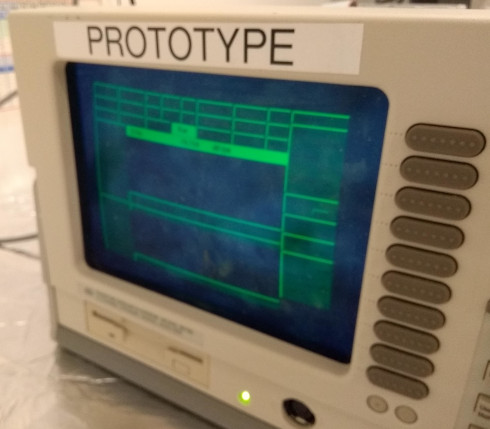 The dim screen (oops, my hand wasn't steady taking this photo). My phone camera has done a better job adjusting the contrast of the text against the background than the eyes of my colleagues and myself. In reality, it's pretty difficult to see anything.

But, the SR785 is not the sort of equipment you just throw away - they cost many thousands of dollars - (around $14k direct from Stanford Research, but add extra in the EU in import duty and distributor fees) and I have known people to open up the units and replace busted capacitors to give them a new lease of life. The expense and preciousness of the SR785 led to me asking the German distributor for a quote for a replacement screen, to be installed myself, not even by an authorised refurbisher. The amount I was quoted was a cool €2k. This would have been for a modern TFT display, at least making the unit a fair bit lighter to move around (it's about 20 kg), but €2k for a screen is just outrageous. I mean, I probably would have paid for it if I hadn't found a solution (the analyser is easily used for about an hour a week to make measurements; everyone in our lab has at some point wheeled it out), but I would have grumbled for a long time about it.

Before shelling out €2k, this morning I thought I'd ask around to see if anyone else in my institute had a broken SR785 (or SR780, which I think is very similar) from which I could salvage the screen. I didn't have much hope. Come 11am, no one had offered one up, but I had two different people reply to tell me that it is possible to increase the brightness by opening up the unit and fiddling with a potentiometer. Oh really?

So, I went to the lab, opened 'er up, and lo and behold, there are indeed a bunch of potentiometers for adjusting the screen. It was literally a case of removing 8 screws, uncovering the innards, adjusting a single potentiometer, then putting the cover back on - ridiculously easy! I would recommend giving this a go before paying for any replacement parts or servicing. It of course voids your warranty, and there are dangeorus voltages present near to the power supply which you must be careful of, but in our case the warranty was long, long out of date and I have some experience with mains devices. 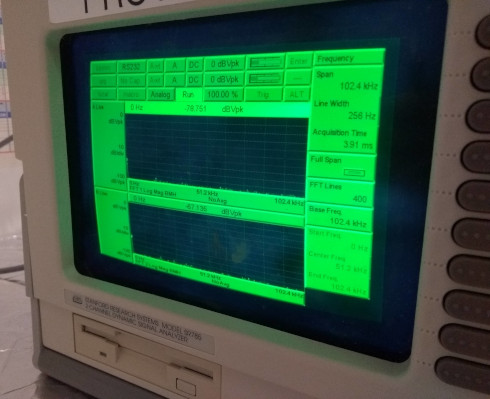 A bright screen at the twist of a screw driver. Huzzah!

For the sake of 15 minutes of work, I got the unit back to normal. There was even more range available on the potentiometer, for when the screen dims again in the future as the CRT continues to age. So, a €2k repair avoided - I should get paid more!

Here are two more photos of the innards of the SR785 for anyone interested: 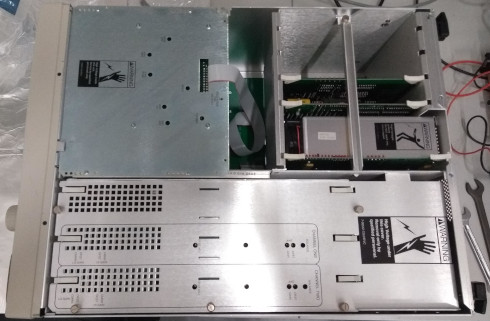 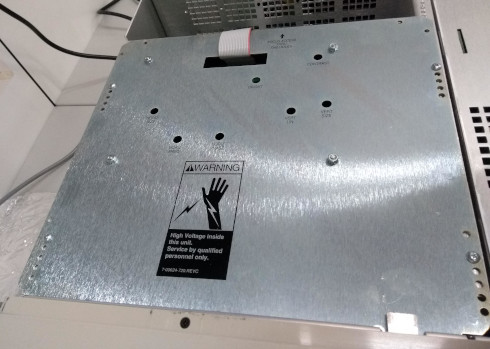 Monitor adjustment panel. Note the "BRIGHT" and "CONTRAST" holes where you can stick a thin screw driver to adjust potentiometers.